Early in 1932 a general meeting was held with the idea of forming a proper club. Nineteen enthusiasts gathered on veranda at “Skipper’s”, but things moved very slowly. A wooden shack was built, with a sail locker at the rear. Vice Admiral Tweedie lent his support to the fledgling club and Lady Tweedie performed the official opening. Elkan Green, at the age of 20, was the fist secretary. 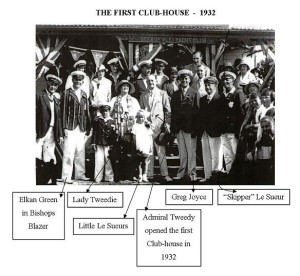 The club grew in strength and soon there was a fleet of about 20 boats ranging from canvas sailing canoes to a few scows and then Redwings came in numbers from Table Bay. Elkan Green brought in an Uffa Fox International dinghy and plans for the Sharpie, of which there was soon a big fleet.

‘Pop” Bongers designed a new clubhouse that was built by the members where today the swimming pool is. The Governor-General, the Earl of Claredon, opened it on February 12, 1934. A path had been cut through the bush to Peninsula Road to allow him access but then it was discovered that he could not walk that far and the path had to be widened to accommodate his car. This ‘path; is the existing ‘Governors Walk.’

In those far off days the Vlei would almost dry up in summer leaving only narrow channels to sail in. The winter of 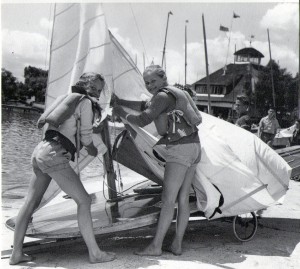 1942 brought disastrous floods to the area and a channel was dug to the sea and a weir built to control the level of the water. This weir was later raised by over one meter. A weed (Potomageton) started to grow in the Vlei in 1939 that made sailing very difficult. A fund was established and an underwater weed-cutting machine was brought in from America. It was mounted on a barge and cut the week a meter below the surface, but to no avail. This battle continued until, as suddenly as it had appeared it sickened and died. All manners of explanations were given but it is thought that the chemicals sprayed on it by the Council helped quite a bit.

By 1954 membership and boat ownership had increased to such an extent that an adjoining property knows as “Skipper’s” was acquired for a junior clubhouse, boat parking and an unofficial pub. The main classes at that time were the Flying Dutchmen, Sharpie, Goodricke, Finn, Sprog, Andy and Dabchick. Dinghy sailing was at its peak in the 1960’s and early 70’s. The very successful training and racing boat for juniors, the Optimist, was introduced in 1971.

By 1979 the Vlei had become badly silted up and a dredger was brought in to pump out the mud, which it did with 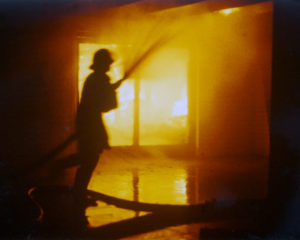 reasonable success. In the early hours of Wednesday, March 2, 1983 a fire broke out in the thatched roof of the clubhouse, and by morning the distinctive landmark was a pile of smouldering ruins. Money came into the re-building fund from far and wide and just one year later on March 24, almost 50 years after the first little building had been opened, the new clubhouse was opened by the Chief of the Navy, Admiral Dries Putter.

In the early 1860’s, 6 to 10 rowing clubs were formed and they used to race in Table Bay for the Table Bay Victoria Trophy. Alfred Club was forming in 1864 and had its headquarters at various sites on the Vlei. As the only surviving club of that era, and with its own long history, it was incorporated in the ZVYC in 1986. 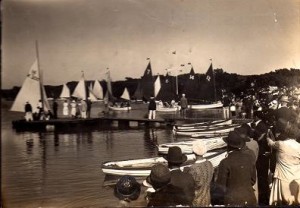 In 1991 Bishops and SACS rowing clubs joining forces with ZVYC and built sheds to house their boats. In the same year the Western Cape Radio Sailing Club was incorporated in ZVYC.

With urban development, the catchment area for the Vlei has become far greater than it ever was. This brings the problem that the run off of fertilizers and manure from the farms as well as pollution is carried into the Vlei. This is a long-term problem that the council is addressing. In the early 1990’s Water Hyacinth became and increasing problem in the Vlei. For the past number of years a ‘draw-down’ (opening of the weir) has taken place for two to three months in the winter. This has allowed the council and Rondevlei Nature Reserve to remove the Hyacinth by mechanical means. The winter rains have, with the weir being open flushed out the Vlei to reduce the build up of silt and give us clean water for the season. 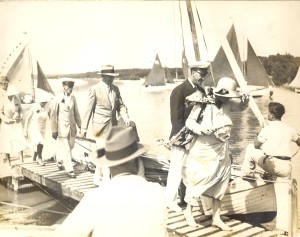 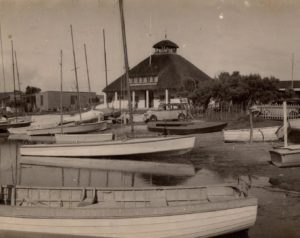 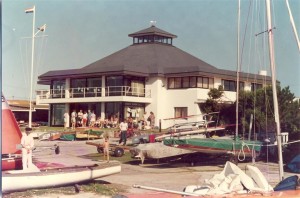 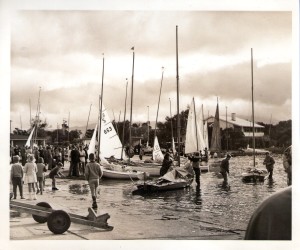